Last summer at Twitter Math Camp, someone mentioned that they have their students to to teacher.desmos.com to create activities.  Genius.  Pure genius I tell you.

This is what my students came up with.

Next year, I hope to be more intentional about how I use this with students because this year it just sort of happened without any sort of plan whatsoever.  What happened was awesome.  With a little more planning, maybe it could have been even better.  (Those were my thoughts when I started this post.  As I wrote it, I wondered if this ended up being so awesome because students didn’t feel restricted by the guidelines I gave them.  There were no rules.  They could do whatever they wanted.  If I had planned, would my planning have narrowed students’ thinking too much, stopping their creativity?)

The idea came out of desperation more than anything.  I had two 7th graders finish all their assignments super early.  My thoughts were something along the lines of, “What?!  You’re finished?  Already?  With how much time left of class?!?  And you finished the Marbleslides activity from yesterday?  Umm…I guess go to teacher.desmos.com.  Yeah.  Good idea.  Do that!”

I was amazed by what they came up with.  The first couple were basic -what I expected to see.  Then I overheard one ask the other, “How do you make the line stop like they did in the other one?”  The other girl responded, “Oh, I think they used those curly bracket things…” and in a couple of seconds they figured out how to restrict the domain -they didn’t know it was called that though as we had never talked about it.

After the test that week, they asked if they could work on it more.  Their excitement over it got me thinking, “What if I had the entire class do this?”  “What if I gave those girls more time to work on this?  What would they come up with?”

I had to find out.  We ended up spending 2 days where most all of my students worked on creating Marbleslides.  Part of me felt guilty for “wasting” 2 days on this, but as I walked around, I was in awe of the conversations students were having and the questions they were asking each other.  I didn’t feel that this was really “wasting” 2 days and wished I had done this before the test instead of after.

The first day, I let students go with minimal direction other than to create their own Marbleslides.  If a student raised their hand, my response was typically, “I’ll listen to your question, but I can’t promise I’ll answer it yet.  I want you to work to figure it out.”  When students asked how to “cut off the lines”.  I directed them back to the Marbleslide activity they had done a few days prior to look at those graphs to try to figure it out, and they did.

When I wanted to push students’ creativity a bit, I pulled up an example from one of the girls who had been working on it for a few days.  They had figured out how to restrict the domain, so naturally all students wanted to know how to do that.  Students really took off after that!

I was pretty much giddy going through what students had made after the first day, and it only got better after that!  I can’t count the number of times I’ve clicked “launch” on students’ work.

Some students created Marbleslides like they had done in the Desmos activity, where the person playing would need to change the graph to be successful.  However, as students’ graphs became more complex, more students just played around with creating the graphs and leaving them so they would see “Success!” when they clicked launch.  I loved seeing students come up with an idea and figure out how to make it happen.

I also love what Sean does here.  What are other ways you use Marbleslides with students?

Here is the link again to their creations.  I’m just so darn proud of them!

Below I’ve commented on a few of the Marbleslides my students came up with.

This is one from a student who isn’t always confident in what he is doing.  Partway through the second day he goes, “I’m the master at this!”  He had a star WAY down the line on the bottom right and was timing to see how long it would take to see “Success!”  He gave me thoughts for other ways to use Marbleslides.

This student also intentionally put a star way off to the right so the marbles barely make it.  Again, she’s not always the most confident.  It was fun watching her teach other students how to do things.

This student had fun getting the orange line just right so the marbles would bounce off the end.

*Those two girls did their homework.

One of the other math teachers I teach with is the dad of one of the girls.  He showed her how to make a parabola, and the things she came up with after that still amaze me.

Her dad helped with the orange parabola, and she came up with the rest.

The next day she showed the other girl how to make parabolas.  The other girl was working on this one.  You can’t really see the line on the graph, but it’s the 3rd equation.  She figured out that she needed that little line there because without it, the marbles wouldn’t go to the right when they fell through the two parabolas there.

At Twitter Math Camp last summer, I attended Michelle’s morning session on differentiation.  In the session she talked about how the teachers she works with have “slowed down to speed up”.  In a nutshell, leading up to a unit students take a pre-assessment on skills they should already know that are necessary to know for the new content they will be learning.  The students then work through various stations on the skills they showed they have not yet mastered from the pre-assessment.  Michelle talked about how by slowing down and getting students to master those skills necessary for the new content, the teaching of the new material was much better and more efficient.

Up to that point, here’s what pre-assessment looked like in my classroom.

This wasn’t the first time I had heard about the idea of stations and students working where they needed to work.  The idea absolutely intrigued me; however, I wasn’t quite sure how I could see it working for me.  I’m pretty type-A and the thought of giving 6th graders that much freedom scared me.  A lot.

BUT fast forward partway through the school year when I start getting into fractions with my 6th graders.  Every year this is a struggle.  They should know so much coming in from 5th grade, but they don’t.  In the past I have spent WAY too much time re-teaching stuff they should already know.

One of my 6th grade classes is ahead of the other two, so I decided to use them as my guinea pigs with something like this.  And it. was. awesome.  I loved it.  They loved it.  It’s been a while since I’ve done something this big in my classroom that I’ve been this excited about.

I was definitely glad I sort of piloted this idea with that one class to start because it helped me work out a few things before doing it with all my classes.  That first hour class recently finished their second round of stations, and my other two classes have just started the second round.  (I loved the first round so much that I created a 2nd set of stations for the new material they were learning.) 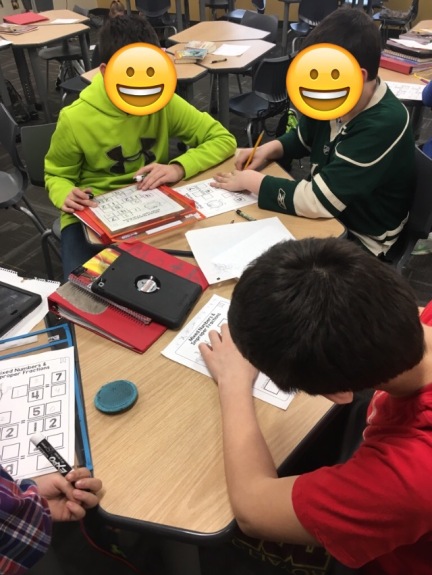 Here’s how this process has worked for me so far: 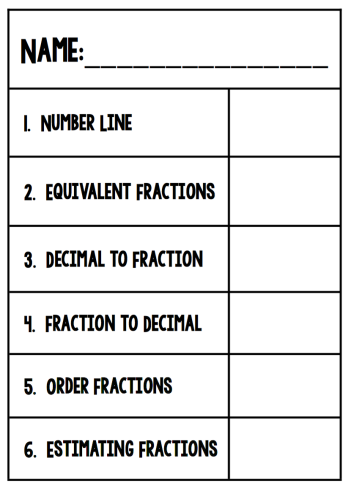 Stations:  This is by far the most time consuming piece of this entire thing. 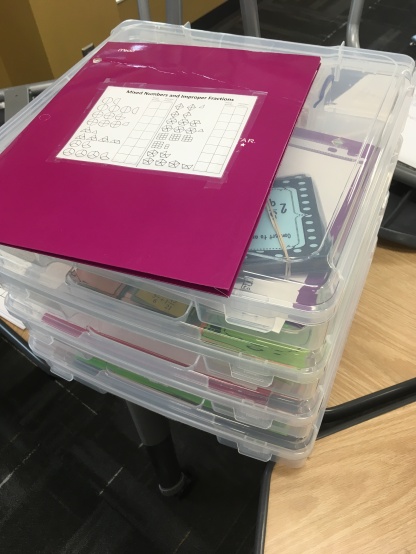 Implementation:  Once everything is set up, this is the fun part!  The first time I did this I was so nervous about how this would go.  I worried I spent all those hours at school preparing it only to have it completely flop after day one, but it didn’t! 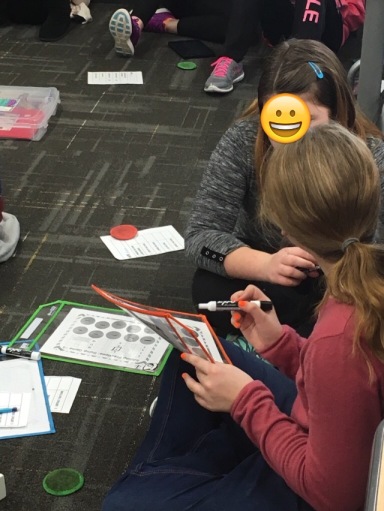 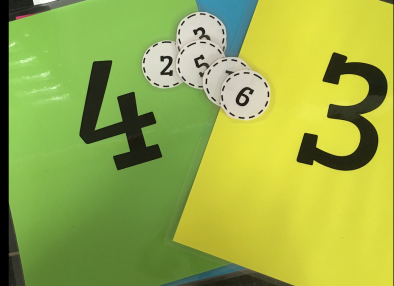 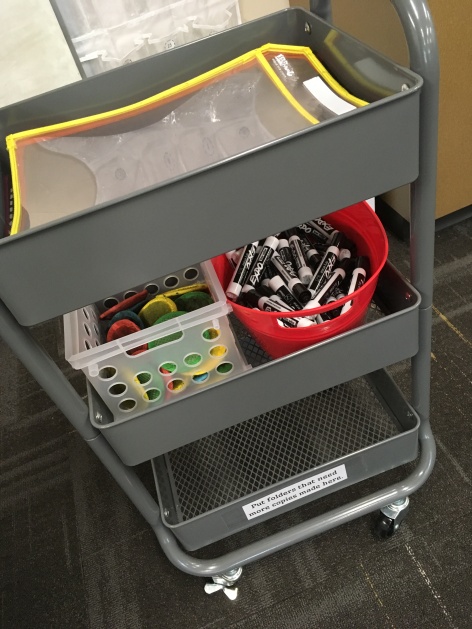 This has truly been one of my favorite things I’ve done in my classroom all year.  It’s so awesome to look around my room and see 10+ groups of students working on different things and know that everyone is working on what they need.  It was definitely a stretch for my type-A personality.  My classroom is typically very structured, but I think that’s part of the reason why this worked as well as it did.  By this point of the year, students know my expectations so they were able to handle the freedom that I gave them.

Did all of my students master everything?  No.  But I believe more did than would have had I done this in large group instruction.  Were some of the students who mastered all the skills quickly bored at the enrichment station?  Probably.  But these are the same students who would have been bored sitting in large group instruction.  I had more students engaged during this than ever before.  One of my students who is a challenge to get to participate and engage in anything was engaged every single day during the stations.  Every day! 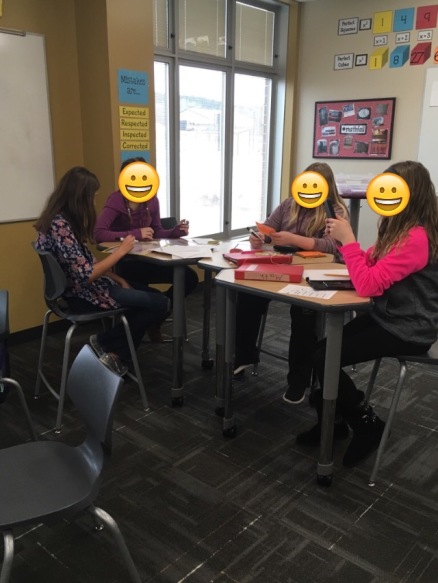 I’ve been in search of a movement activity/game that I thought I could get my 8th graders to buy into.  I’ve written here and here about things I do with 6th graders, but I haven’t been brave enough to try those with my older kids yet.  I use stand and talks frequently, but I was looking for something that was more like a game.

I had first read about Slope Dude on Sarah’s blog a while back.  I loved it, but at the time I wasn’t teaching classes where this was relevant (in hindsight, that probably wouldn’t have mattered, I should have done it anyway).  Now that I’m teaching 8th grade, I was excited to use it in a place the fit into what I was teaching.

The day before I showed students the video, I pumped them up about the video we were going to watch that would change their lives forever and how it was a SUPER high budget video.  😉  I love giving them an excuse to roll their eyes at their crazy math teacher!

In class the next day, we watched the video.  They had a love/hate relationship with the video, and it was fantastic.

I put this slide up on the board completely taken from Sarah and told them to stand up.  They groaned and complained, but not for long! 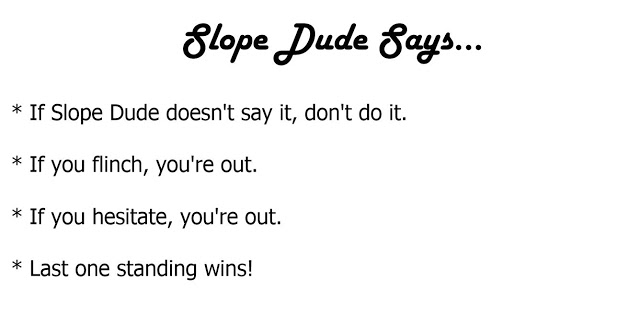 I played exactly how Sarah did.  We first went through the motions together before playing.  It’s just like Simon Says.   Here’s her post on Slope Dude Says, and you can download her posters here.

These are comments from my students in the past couple weeks:

“We were going to play Slope Dude Says in English, but then the teacher came back.”

“Are we going to play Slope Dude Says today?”

During work time, I saw numerous students move their arms to help them determine the sign of the slope before finding the actual slope.

“I’m pretty sure L wasn’t here for slope dude at all, can we play it today?”

“Even when we’re done with this stuff, can we still play Slope Dude Says?”

I call that a win.